This week, in response to some quite extraordinary nonsense being spouted by the US right wing about one of the UK’s most beloved institutions, NHS users on this side of the pond began sharing their own stories and words of thanks on Twitter.

The hashag #welovetheNHS quickly saw tens of thousands of individual messages of support for “socialized medicine”, with many sharing stories of loved ones’ care. The story spilled over into mainstream media as politicians joined in, and on Thursday made the front page of the Evening Standard. 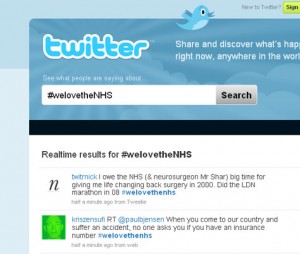 72 hours on, it’s now the subject of news and opinion columns on either side of the Atlantic, as well as a hell of a lot of Twitter spam.

What’s interesting, for me, is the comparison between this organic campaign and an earlier one. Back in 2007, the Labour Party launched a campaign to celebrate the 60th birthday of the NHS. Called Proud of the NHS at 60, this asked people to share their individual stories and experiences as NHS users, and ask their friends to do the same.

The principle is the same, but the outcomes were very different; Proud of the NHS at 60 had relatively little impact, while #welovetheNHS really caught the public’s imagination and became one of the biggest news stories of the week.

I can think of several reasons why this is:

1. Authenticity
Proud of the NHS at 60 was conceived either by the Labour Party or a PR agency working on their behalf. The campaign objective was to translate pride in a national institution into support for the party which founded it.

Conversely, #welovetheNHS began as a grassroots campaign, with the aim of setting our transatlantic cousins straight about state-provided healthcare. That people are keener to join in a campaign begun by real service users than an incumbent political party is hardly surprising. Nonetheless, it provides a useful lesson in the dynamics of viral campaigning – it’s damned hard to make these things take off unless it’s seen to be genuine and heartfelt.

2. Leadership
The hashtag #welovetheNHS was originally coined by comedy writer Graham Linehan. As the creator of TV shows such as The IT Crowd and Father Ted, he’s not a figure normally associated with healthcare, or with politics. However, Linehan (@glinner) is one of the UK’s most popular Twitter users, with a wide base of followers with widely varying interests.

Linehan has had some success using Twitter as a campaigning tool already, spearheading a petition on the Daily Express’s front page on Dunblane survivors.

His popularity and diverse following meant he had a good critical mass of followers re-tweeting his original post, enough for it to take off. A strong launch to a sizable critical mass of users is essential for viral campaigns to work.

3. Success
Everyone likes a winner. Research into voter behaviour, for instance, consistently shows that people who don’t already hold strong views one way or the other will often pick the person or party who looks likely to win, as we like to be on the winning side.

Those who heard about the campaign later were arguably attracted to join by the considerable success of the campaign in its first few hours. Those who had already participated were motivated to keep on adding tweets by the prospect of greater success.

So people like to join something that already looks like it will be good/successful. The early stages of the campaign are when its success is decided.

4. Seige mentality and good, old-fashioned patriotism
Because we might slag off the NHS all the time for its long waiting lists, MRSA infection rates, and so on – but it’s ours, goddamnit, and we’ll stick up for it.

The NHS is one of the UK’s most popular institutions. Almost everyone concedes it’s not perfect, and will happily criticise it. But over 90% of Britons wouldn’t be without it. Hearing some of the hysterical, inaccurate information doing the rounds in the US motivates people to defend an institution they like.

Conversely, the Proud of the NHS at 60 campaign launched when there were no obvious attacks on the health service from outside, so people had little motive to join.

What this illustrates rather well is the enormous difference an enemy makes to the success of a viral campaign.

It seems highly likely that Twitter campaign stories will continue to cross over into the mainstream media, just as ‘10,000 people have joined a Facebook group’ stories did throughout 2007. But just as with Facebook, the most successful campaigns will be those that were begun by people considered the have an authentic voice (rather than by whole institutions), which offer a strong motivation for others to join, and which quickly reach a critical mass of users.

One thought on “What #welovetheNHS tells us about viral communication”

I went to an office for the first time in 21 months. It was quite nice seeing people in 3D. I’m in no hurry to do it again multiple times a week but definitely up for doing it again next year. #work #london #skyline
It was SO good to go to a proper wedding knees-up for the first time in years. Committing wedding hair to the grid because it was banging. #retrostyle #vintagestyle #rockabilly
Zuiderkerk, from the Staalmeesterbrug. But higher res than when Monet painted it. #amsterdam #netherlands #amstergram #igamsterdam
Heave away boys, heave away. #amsterdam #canals #holland #netherlands #igamsterdam #amstergram
Typography of the U-Bahn. #ubahn #ubahnberlin #typography #berlin #germany
Didn’t have much spare time during the week so squeezing a spot of light tourism in today. I’ve missed seeing new places so badly. So this is brief but wonderful. It’s a lovely sunny autumn day here too. #berlin #germany #germanytravel #igtravel #travelgram #instatravel
Gloomy day in Berlin. Went for a swim. Started raining hard as soon as I got there. I did not swim. Instead I accidentally fell into Sephora. #alexanderplatz #berlin #germany #travel #travelgram #instatravel #igberlin
Got in the zone with work. Looked up to see this absolute banger of a sunset. Life is good. #sunset #berlin #germany #travel #travelgram #instatravel #igberlin
Guten Abend Berlin!
It’s so good to see this local institution open and buzzing again. Amsterdam’s so wonderful in the summer, and - for now at least - it feels back to normal. #amsterdam #jordaan #netherlands
Loading Comments...
%d bloggers like this: